While I sometimes feel pangs of envy (…or is it lust….?) on hearing about the presence of a rare bird, I would not admit to being a twitcher. There is something rather desperate in the idea of travelling miles (or hundreds of miles) to try to see a bird which was originally found by somebody else and put out on the birders’ grapevine. I’ve sometimes described myself as the worst twitcher in the world, anyway, because on the rare occasions I’ve succumbed to temptation, the bird has usually disappeared by the time I arrive. I can justifiably claim to have been the first person not to see the great spotted cuckoo at Tenby in February 2014 because I waited too long to go down. It had probably died or been blown away during the particularly stormy day of my journey.  To fail in a pointless quest is particularly soul-destroying, I find. But if a bird is on my local patch I might eventually get round to having a quick look, sometimes successfully, sometimes not. A local bird would involve little time investment, or travel expenses or carbon emissions.

I was tempted last week, though. A red-footed falcon had been reported in Staffordshire, well over a hundred miles from here. However, a visit to my aging mother was long overdue, and she lives ……. in Staffordshire. I do like multi-purpose journeys! So Saturday morning found me on the northern outskirts of the Potteries joining a few dozen other birders staring at a red-footed falcon on an overhead electricity cable. It was hardly the most difficult twitch in the world. The click of motor-driven shutters rang out. 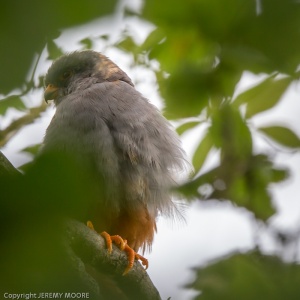 Being an immature male it would not be breeding this year; but one has to wonder why ever would this bird end up in north Staffordshire? It probably should have been somewhere in eastern Europe. Itcould conceivably have been escape from captivity but the only known captive red-footed falcon locally was an adult male in a rescue centre about twenty miles away. Whatever – in birder’s parlance it was “performing well” – perching on the cable in full view, searching for insects on the ground below. There was a strong breeze blowing, though, and, probably seeking shelter,  it later spent some time in a hazel bush just a few feet from the pavement on which expectant birders waited. It was so close that I had to take a few steps backwards before I could focus down on it with my binoculars. However a shield of branches and leaves made it difficult to see more than face or feet at any one time. It was an both intimate and distant encounter at the same time.

As far as the main image is concerned the bird was by no means at its closest here. I feel that the green background  sets off its plumage better than the grey sky did, however. And as for the composition, I suppose I just like to be different! Any thoughts on this?

To read more Tales from Wild Wales as they are published, please click the blue Follow button.

6 thoughts on “An intimate and a distant encounter.”