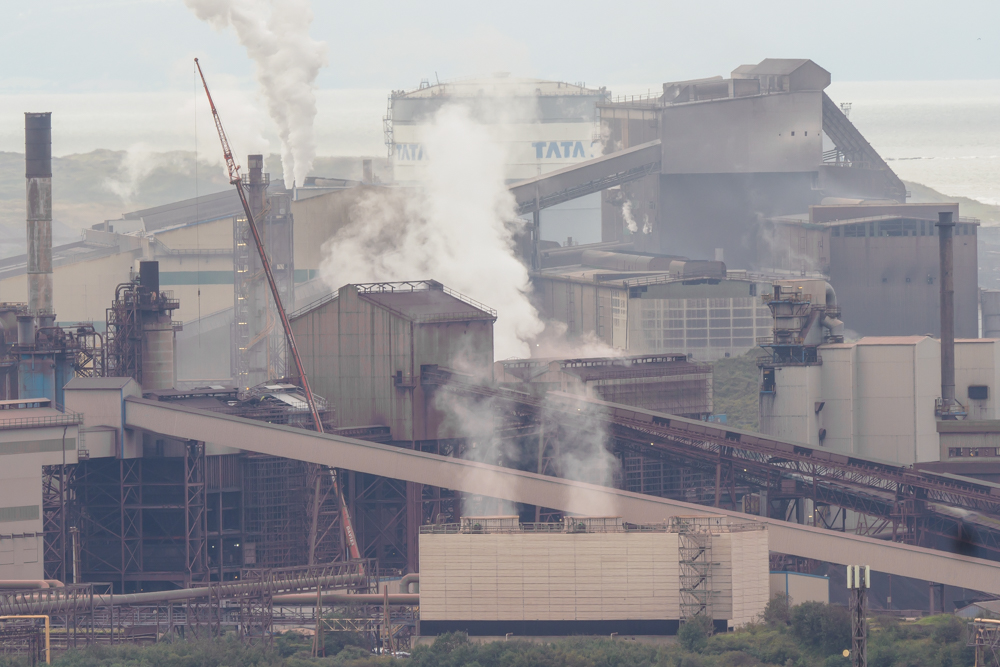 For a while I have been itching to get down and dirty with some industrial landscapes. I toyed with the idea of a trip down to the south-west of England to photograph the “Cornish Alps” – the china-clay tips and quarries around St Austell, and I still may do that before too long. But then the memory gradually came back to me that there was still an area of heavy industry right here in Wales which may well now be unmatched for visual impact in the whole of the UK. Most evidence of heavy industry in Wales has been tidied way, all of the collieries and most of the steel works closed and demolished. But despite periodic threats of closure,  what might be called the Port Talbot sacrifice zone is still in operation.

Strangely I still have a warm feeling about the years when coal extraction and steel making were staple industries in many parts of the UK. It probably dates back to my very earliest era of picture taking which came to an end in 1968, with the demise of steam power on British railways. I still regret I never tried to photograph heavy industry in the 1980’s and 90’s in the Welsh valleys, for example, when it was still cheek-by-jowl with otherwise unspoilt countryside. I did visit Port Talbot to photograph the steel works in the mid-1990’s and well remember a very unpleasant encounter with a security guard on the beach – which I hadn’t realised was actually owned by British Steel.  On another visit about ten years ago I had a frightening encounter on a car park, which turned out to be a dogging venue, at night, in my camper van,  So that was two reasons why, photographically speaking, I have never really done the place justice!

My first location was actually the promenade at nearby Aberafan, which has some bizarre life-size concrete wildlife models on it – emperor penguins and a whale. Then I made my way to the south end of the steel works site where a public footpath runs down a track through fields to the beach – all now owned by Tata Steel. Having arrived at the foreshore I stood very prominently there for ten minutes and pointed my camera at things to make sure I could be seen by security if present.  There didn’t seem to be anyone around. I began the walk back along the public footpath but strangely there is no barrier between it and the site itself, so no disincentive at all to keep out…..  I soon found myself amongst coal conveyor belts and huge piles of coal. From somewhere came the evocative (for me) smell of burning coal. 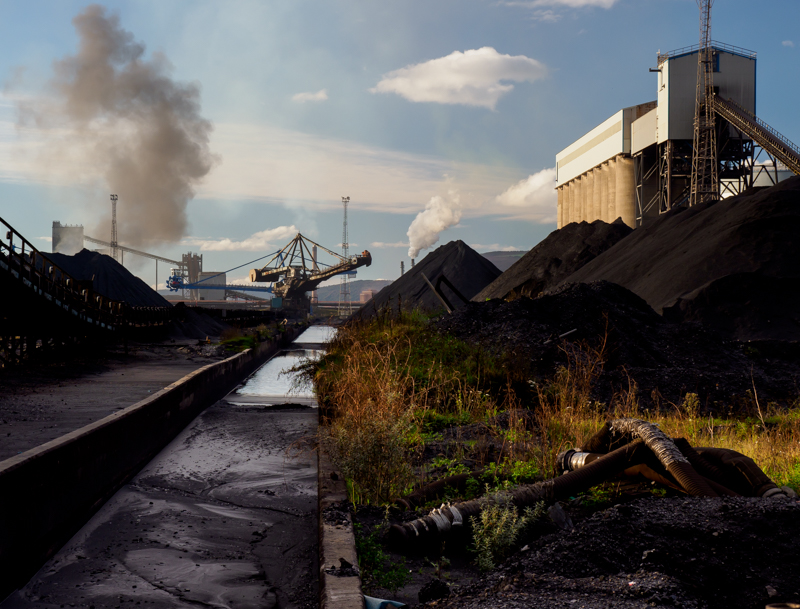 I pottered around with the camera for almost an hour without interruption. After a while some stubborn cloud moved away and allowed some beautiful late afternoon sunlight to illuminate some of the structures. These were just the type of images I never thought I’d have the opportunity to take, but I didn’t push my luck by intruding too far into the site. Suddenly I got a very strong feeling that my time was up and hurried back to the track. Almost immediately there was a rumble and a clatter as one of the conveyor belts started up; and a small yellow pick-up truck appeared. I had timed my exit perfectly!

The next day I climbed steeply up a hillside overlooking Port Talbot which gave me an overall view of the site beyond it. I took my tripod and full photographic kit this time which gave me a complete range of focal lengths from 24 to 800 mm (full frame equivalent).  The longer focal lengths were the most useful as I was more than a mile from the nearest edge of the extensive steel works site. The top (main) image was taken with my Olympus EM1 mk 2 and the Panasonic 100- 400 zoom set at 350 mm. In full frame terms that’s 700 mm or 14x magnification. These figures are way beyond what could have been obtained with reasonably priced equipment even ten years ago. I have examined the file closely and the quality is really pretty good even at 100%.

One thing that really puzzled me about these images was the white balance. I normally use “auto” and it’s usually fine, but as you can see the main image has a dirty pink / salmon colour cast. At first I corrected this in post-processing but that didn’t look right either. I then noticed a shorter focal length image showing some foreground foliage which looked perfectly normal. I have concluded that the centre of the site in the main picture is suffused with coloured fumes emitted by one of the processes there. You can see this contrast in the third image (@132mm equivalent). Who would live near Port Talbot? The air quality must be dreadful.

But I do think these photographs have a message for all of us. I don’t know what type of steel this plant produces but no matter how environmentally friendly a lifestyle we live, if we use a car, or a saucepan, or a fridge, or a filing cabinet, somewhere in the world a steel works like this was involved in its production.

To read more Tales from Wild Wales as they are published, please click on the blue Follow button.