We’re well into autumn now and I recently decided I needed some photographs of that spectacular fungus, the fly agaric. I was up in north Wales for a couple of days, and a mixed forecast suggested I might get some sunny scenic landscape photography done; any cloudy conditions being more suitable for more intimate “autumn colours” and woodland scenes. Yes, I know I’m a traditionalist but at my age what do you expect!

By mid-morning on the first day it was starting to brighten up although a strong southerly wind was blowing. My first destination was a hilltop above Betws-y-coed, with the town deep in the valley below and the main peaks of Eryri in the background. But why not first spend an hour or so looking for fly agarics in the woodland leading to my destination? Two minutes later, right by the path, I had found my first! It was a perfect specimen, I thought, in my excitement, so I got the tripod out and began taking some ground level shots with my telephoto zoom. A passer-by told me that fly agarics were very common this year;  some images he showed me on his phone looked great, and I realised my own specimen was not actually that special – tall and broad, yes; but crimson in colour with flecks of white on the cap? No, not really. I had a look around. 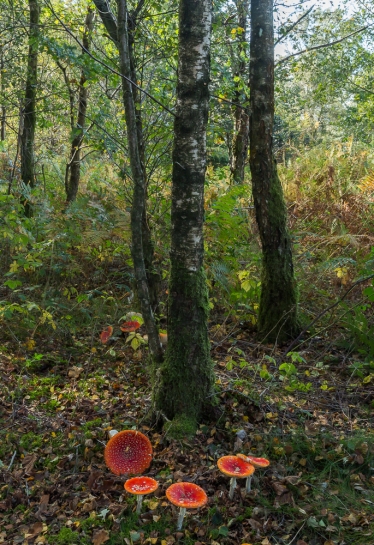 Fly agarics are usually associated with birch trees (and sometimes pine or other species). The fungus has a mutually beneficial relationship with the roots of the tree which helps both species thrive. What I found on my short exploration amazed me. Over an area of perhaps a hundred metres by fifty, I found several dozen fly agarics. Most were already past their best, being flat-capped, or even bowl shaped, with the red colouration having already faded towards orange. But I found one particularly photogenic group among some birch trees and did a bit of “gardening” to expose them. One was already broken off at ground level so I decided to make a feature of it alongside several other complete ones. Things are rarely as simple as you hope for, though, in this case because the sun was now shining brightly, creating areas of high contrast on the woodland floor. Every so often a tiny wispy cloud passed in front of the sun but even this didn’t give me the even lighting I needed for this shot. I wandered around, found more fly agarics, did some tai chi, looked at the sky over and over again, waited and waited some more. Eventually I realised that a better image would also include the mushrooms’ habitat so I swapped to a wide angle, placing them in the foreground with birch trees and bracken taking up the rest of the frame. Contrast was still a problem so I tried two other techniques:

1)  Using a ND grad over the brightest part of the image (at the top), and

2)  Bracketing with the intention of combining two images in Lightroom at the processing stage.

To some extent both worked, but the image (above) was processed using the HDR control in Lightroom. I had to examine individual frames carefully and choose those with the least subject movement for combining: the wind was still strong.

Thirty-six hours later I was back, and within five minutes had found a tiny, perfect little specimen freshly emerged from its protective sheath, looking just like something you might find in a very upmarket cake shop (see above). And it really wasn’t a difficult shot to take; a little gardening to clear dead bracken stems and twigs, tripod, aperture priority, f5.6 for minimal depth of field, and ….success!

The intervening day was glorious – warm, sunny and cloud-free; perfect for pure enjoyment but not great for the landscape photographer. I spent the night in the van by Llyn Crafnant above Trefriw. I do love the length of these autumn nights. No problem getting a good night’s sleep and no rush to be up before dawn. It was perfectly calm for several hours in the morning and, having found a good spot by the lakeside, I took a long series of images of the head of the valley and its reflection as the sun rose. In the end it was the very last image I took that was my favourite, so perhaps I should have waited longer!

Beyond the head of the valley, completely invisible from within it, lay the great peaks of Eryri – the Carneddau, Tryfan, the Glyderau, Yr Wyddfa and its outliers, and finally Moel Siabod. It was half-an-hour’s walk to a point where they could all be seen. Or so I thought: it actually took something like an hour and by the time I got there the sun was really too high and the sky too blue for successful image-making. But it was a great walk and I will do it again another day. As for the hoped-for view above Betws-y-coed, cloud was covering the peaks on both of my visits. Oh, and I got drenched in a two-hour downpour in woodland near Dolgellau on the way home. Light rain showers, the Met Office forecast said……….