Following the completion of the Bird/land project I realised it was time to step back from bird photography for a while. My bread-and -butter income still comes from the sale of postcards and some of them were beginning to look a bit tired. Rather than reprint them again I decided to spend some time replacing them with new designs. So it was time to put my landscape photographer’s hat on again……

Taking photographs for postcards must be easy…..right? Well, er…..no! Somehow one must be able to sum up a well-known location in just one image, the sense of the place, if you like, and ideally in a way that has not been done before. Take the Brecon Beacons, for example. They may not be the most dramatic mountain range in the UK but they are very popular. I had seen a photograph on a flyer for a holiday cottage rental company showing  a former farmhouse idyllically situated in the foreground with the main peaks behind it. It looked like it would be worth searching out the location. When I eventually found it,  I couldn’t believe it was the same place. The original photograph appeared to have been taken from well above ground level, and there was a string of electricity cables and phone lines running to the house. It had been photoshopped out of almost all recognition!

Whilst on the lookout for a new viewpoint I’ve spent hours driving and walking around the narrow, high-hedged lines between the Beacons and Brecon. Every so often I would catch a glimpse of the view I wanted through a gap or a gate but on closer inspection there was always a snag. I eventually narrowed it down to a couple of fields, through which no public right of way existed. A  friendly farmer gave me permission to cross his land to reach the spot but on the two occasions I was there during the autumn conditions were just not good enough. So that particular view will have to wait for another year. And even then, I have a horrible feeling there will be a snag there too.

What I did find earlier in the year after many hours searching, was a view of the Beacons from the graveyard at Brecon.  The image may not have a great deal of merit in an artistic sense but as a postcard it looks like a winner. I’m not sure yet what I’ll use as a caption!

To read more Tales from Wild Wales as they are published, please click the blue Follow button 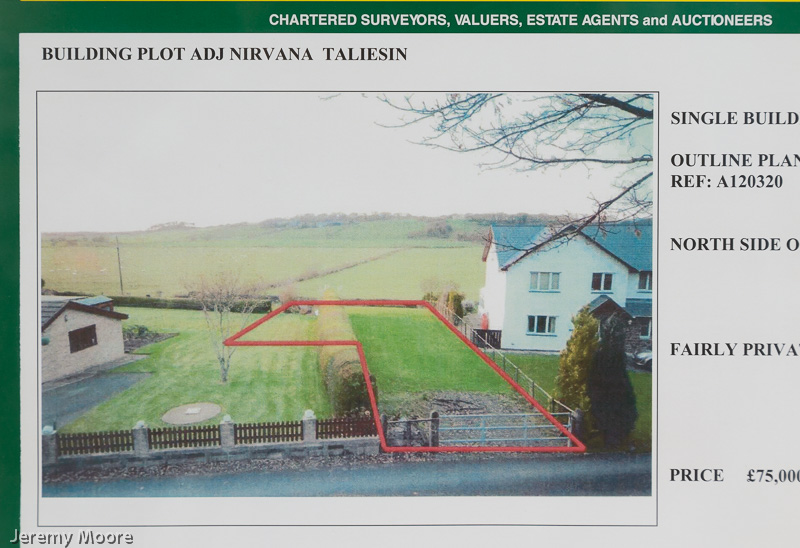 You can get very close for £75k, according to this estate agent.

It’s been a quiet time recently for me photography-wise. I’ve taken delivery of 48,000 of my Wild Wales postcards, beautifully printed for me by a local printer, and now I have to get out on the road and sell them! Just waiting on the first batch of fridge magnets too, being air-freighted from China. At first the idea of producing fridge magnets seemed a bit tacky, but I gradually came around to the idea. Depending on the image (and the quality of the printing) they can be quite attractive. We’ll have to see how they go.

For some reason I happened to glance in the window of a local estate agent this morning. We know they tend to enhance the positives of their properties but this is surely going too far…..!